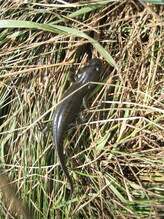 Tiger Salamander
​Below are core terms relating to water that are useful to know.

Acid Mine Drainage – the outflow of acidic and metal-rich water from mines where ore or coal mining activities exposed rocks containing pyrite, a sulfur bearing mineral.  Mines built as early as the 1800s were developed using gravity drainage, to avoid excessive water accumulation in the mines.

Alluvial –  Sand, silt, clay, gravel, or other matter deposited by flowing water, as in a riverbed, floodplain, delta, or alluvial fan.

Amphibians – cold-blooded animals such as frogs and salamanders that metamorphose from a juvenile to an adult form. They cannot generate their own body heat and so rely on the temperature of their environment to help them keep warm or cool enough to survive.

Aquatic Habitat – the physical and biological features that provide food, shelter, protection and mates for reproduction for species that live in areas permanently or occasionally covered by water such as lakes, reservoirs, rivers, perennial and intermittent streams, wetlands, or ponds, sloughs, and estuaries.

Aquifer – an underground layer of water-bearing permeable rock, rock fractures or loose materials (gravel, sand, or silt) that store and/or transmit water to wells and springs.
Continental Divide – an imaginary north/south line that sits atop a continuous ridge of mountain summits that divide the North American continent into two main drainage areas. The Divide runs from northwestern Canada, south along the crests of the Rocky Mountains in the United States, then on into Mexico. Rain or melting snow on one side (via rivers and streams) flows west into the Colorado River Basin and ultimately into the Pacific Ocean; on the other side, rivers and streams flow northeast to Hudson Bay, Canada, or southeast to the Gulf of Mexico.

Drought – a period of unusually dry weather that persists long enough to cause serious problems such as crop damage and/or water supply shortages. The drought's severity depends on the degree of moisture deficiency, the duration, and the size of the affected area. Southwest Colorado receives its water through highly complex seasonal precipitation; the patterns and quantities of precipitation are a result of our interior continental location, far removed from primary oceanic moisture sources, in combination with Colorado’s high elevation and rugged terrain. These factors make precipitation in the San Juan Mountains highly episodic, variable in time and space, which makes long-range predictions very difficult.  Paleoclimate records indicate that the southwest has experienced many multi-year droughts in the past 20 centuries. There are four different ways to describe drought conditions:

Floodplain – Low-lying areas of land where floodwater periodically spreads when a river or stream overtops it banks. Riparian vegetation along streambanks and in the floodplain reduces the velocity of floodwaters, lessening the erosive force of the flood and capturing nutrient-laden sediment. Floodplain soils absorb water during the wet season, then slowly release moisture to plants and into the stream. This buffers the effect of peak runoff and keeps plants growing and streams flowing longer. Streambank vegetation also helps cool surface water temperatures and creates important habitat for fish, waterfowl, and other wildlife species.  A properly functioning floodplain reduces flood volumes and keeps the river flowing longer into the dry season.

Gold Medal Fisheries – also known as ‘Gold Medal Waters,’ these fishing areas have been designated by the Colorado Division of Parks and Wildlife as providing exceptional areas to catch large trout. These waters are defined as having public access and being able to produce 60 pounds of standing stock per acre, and at least twelve 14" or larger trout per acre.  The Animas River provides “Gold Medal” trout fishing opportunities primarily for brown and rainbow trout in the heart of Durango.

Groundwater – refers to water that flows or seeps downward and saturates soil or rock, supplying springs and wells. The upper surface of the saturate zone is called the water table. Groundwater also refers to water that is stored underground in rock crevices and in the pores of geologic materials that make up the Earth's crust.

Headwaters – refers to both the source and upper reaches of a stream, and to the small streams that come together to form a river. Also, headwaters may be thought of as any and all parts of a river basin, except the main stem of the river.

Native fish – in the western United States, this refers to the species of fish commonly found in streams prior to the introduction by settlers of fish from the east coast and/or Europe starting in the 1800s. Examples of native fish within the San Juan and Dolores watersheds include the San Juan lineage and green lineage Colorado River cutthroat trout species that inhabit cold water headwater tributaries as well as the big river/warm water inhabiting bluehead sucker, flannelmouth sucker and roundtail chub species.

Native fish recovery – proactive measures carried out by management agencies that are defined in conservation agreements and strategies designed to replicate and increase populations, and to secure and reduce threats to habitat and fish.

Riparian – relating to wetland plants that are adapted to and depend on the shallow groundwater table bordering rivers and other bodies of water.

Snowpack – one of nature's methods for storing water, along with aquifers, wetlands, lakes, etc. Colorado's largest source of water storage is snowpack. 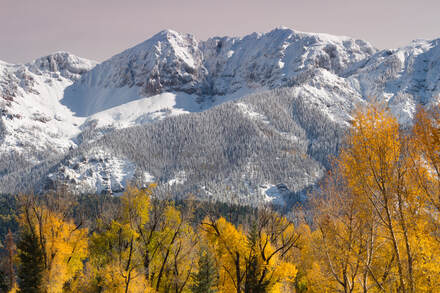 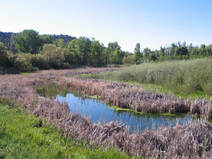 Streamflow – or channel runoff, is the movement of water in streams, rivers, and other channels, and is a major element of the water cycle. Stream flow, or discharge, is the volume of water flowing in a stream channel expressed as unit per time (cfs = cubic feet per second) and is an important determinant of water quality and aquatic habitat conditions. High water temperature, low levels of dissolved oxygen, and harmful levels of toxins can all be exacerbated by low stream flow. Moreover, the quantity, quality and connectivity (e.g., fish migration) of aquatic habitats are also influenced by flow.

Sustainability – the creation and maintenance of conditions under which humans and nature can exist in productive harmony to support present and future generations.  Sustainability presumes that resources are finite and should be used conservatively and wisely with a view to long-term priorities and consequences of the ways in which resources are used. In simplest terms, sustainability is about our children and our grandchildren, and the world we will leave them.

​Water Conservation Measures – includes all the policies, strategies and activities to sustainably manage the natural resource of fresh water, to protect the hydrosphere, and to meet the current and future human demand.  Activities to conserve water can be as straightforward as fixing leaking faucets around your residence or changing your outdoor watering from flood irrigation to a sprinkler system that comes on at night.

Water Cycle – the circuit of water movement from the oceans to the atmosphere and to the Earth and return to the atmosphere through various stages or processes such as precipitation, interception, runoff, infiltration, percolation, storage, evaporation, and transportation.

Water Quality – refers to the chemical, physical, biological, and radiological characteristics of water. It is a measure of the condition of water relative to the requirements of one or more biotic species and or to any human need or purpose.

​Watershed - a land area that channels rainfall and snowmelt to creeks, streams, and rivers, and eventually to reservoirs, bays, and the ocean.

Wetland – areas where water covers the soil or is present either at or near the surface of the soil all year or for varying periods of time during the year, including during the growing season. The prolonged presence of water creates conditions that favor the growth of specially adapted plants (hydrophytes) and promotes the development of characteristic wetland (hydric) soils. Wetlands found on the San Juan National Forest include riparian areas, fens and wet meadows. Many of these wetlands are seasonal (they are dry one or more seasons every year) and may be wet only periodically. Even wetlands that appear dry at times for significant parts of the year often provide critical habitat for wildlife adapted to breeding exclusively in these areas.